What began as a Rotary exchange student/host family relationship has turned into an “adopted” mother/daughter love.  Barbara and I have retained close contact, visiting each other for special occasions, and thus creating a close bond.  Recently accepted into the University of Frieburg’s Doctoral Program, she also has raised an outstanding son, and she loves to cook!

Here’s Barbara on Austrians and their strudel:

“So there is not really a special occasion for Strudel. It’s something you will eat as a desert with your afternoon coffee (you know most Austrians have a coffee break in the afternoon and that’s the time they usually eat der Strudel) BUT you can also eat it as a dish for lunch (warm + often with vanilla sauce). They often serve it at coffee places and also at little snack places in skiing areas – so when people take a break from skiing they can eat a warm apple strudel inside (but also restaurants that serve traditional Austrian food will have it as a desert).”

Actual strudel dough is typically not available in Texas, but puff pastry makes a suitable substitute.

According to Texas State Historical Association – In 1990 approximately 2,500 Austrians lived in Texas.  Currently the Dallas area boasts an Austrian Dallas – Ft Worth Club to retain traditional food, culture, and language.  Among notable Austrians who contributed to Texas are: 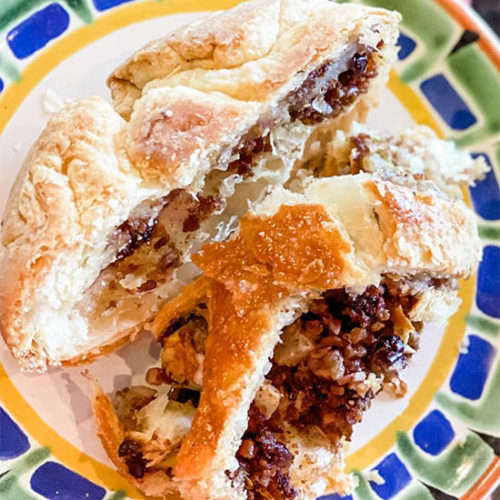